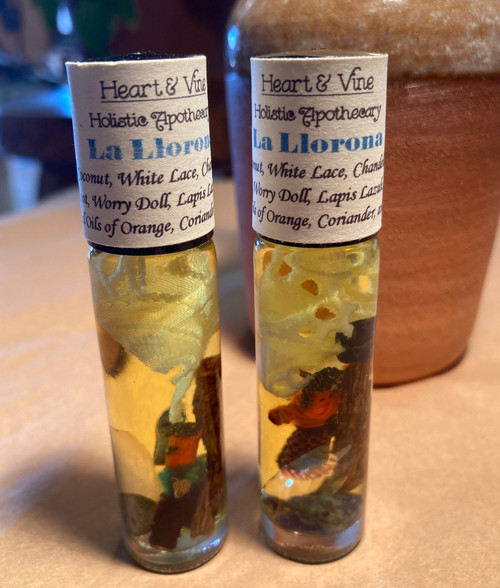 Perfume oil From the maker: “The legend of La Llorona is about Maria, a beautiful woman who refused the advances of every man in her village. One day a beautiful lord rode through and they fell in love, got married, and had 2 children. Eventually Maria felt the lord's attention waning and one day as she was walking with her children by the river she saw her husband with a younger, beautiful woman. In a jealous rage she threw her children in the river where they drowned. She was instantly regretful and threw herself in after them. From that day forward her spirit has haunted the waterways of the Southwest, looking for her lost children and taking those who wander to close to the edges of rivers, acequias, and ditches. She is also conflated with Malintzin/Malinalli (also called La Malinche), the Nahua woman who became the interpreter and lover of Hernán Cortés, mother to his child, Martín. Today her name is synonymous with "traitor to her people", though I think both of these stories, Malinalli's and Maria's, would make more sense if both women were victims of domestic abuse, doing what they needed to in order to survive in a world that would rather escape goat and malign them for centuries, turn them into monsters without just cause or due process. La Llorona is also part of a family of spirits called Women in White, ghosts of women who died by violence and now wail and moan to warn of impending danger or imminent death. This oil supports survivors of domestic violence with the protective scents of orange, coriander, and frankincense, helping to ensure that no more women are turned into villains so their abusers can remain spotless in the eyes of others. Fu*k that.”