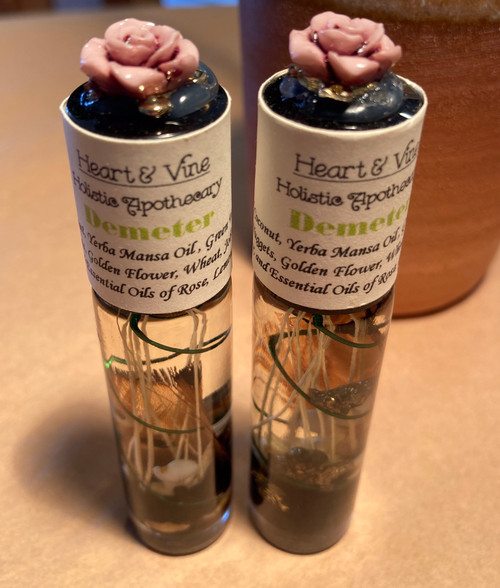 Demeter- Perfume Oil From the maker: “Best known as a goddess of wheat and fertility, Demeter is a prototypical Mother archetype. Her's is the womb from which life springs, the ‘force by which the green fuse drives the flower’. The most famous myth in which she is featured was central to the Eleusinian mysteries, where her daughter, Persephone, is forcefully taken from the meadow to the Underworld, by Demeter's brother, Hades. Demeter travels the world looking for any trace of her beloved daughter, but finds nothing. She enters a deep depression and withdraws all her gifts from the Earth, so no crops can grow and no water flows through the soil and the harvest rots in the store houses. The gods ask Zeus to intervene, but even he does not know where Persephone has gone. Finally, as Demeter weeps in a cave, the Great Goddess Hekate hears her and upon learning why the harvest goddess cries, tells her that she knows where Persephone has gone. She relates the story of Persephone's abduction to Demeter and then leads her to the Underworld to find her daughter. Once there, Demeter demands that Hades release her daughter, but Hades has already made Persephone his Queen. He asks her if she would like to go with her mother, to which she says yes, but his condition for letting her go is that she can have had none of the food of the dead. Unfortunately, she had eaten some seeds of the pomegranite (or possiblyseeds of the henbane flower). A deal is struck that for part of the year Persephone would stay in the Underworld and the rest of the year with her mother above ground. I think this is a patriarchal retelling of the original tale, which is more about the inherent power of the Earth. Demeter is not an ‘overly emotional’ or ‘hysyerical’ woman and Persephone is neither property nor a bargaining chip. They are two of the most powerful and feared godesses of the pantheon. Demeter is not only the womb from which all life is birthed, but the tomb to which life returns. She is the goddess not only of the harvest, but of the entire cycle of birth, death, and rebirth and all the laws that govern it. She IS life and death combined, the forces that drive the manifested world as represented by Persephone. If you are dealing with injustices, out of control cycles, or have no clue what to do, Demeter is there to help. If you've started a new project or you need help figuring out the next steps for one you've had under way, Demeter can help. If you need the strength to make powerful, long-lasting change in your life, if you're dealing with ancestral traumas, past life issues, and integration of lessons in this life, Demeter can help. She is the Great Mother, the Holy Death, and the Divine Child all rolled up in one!”