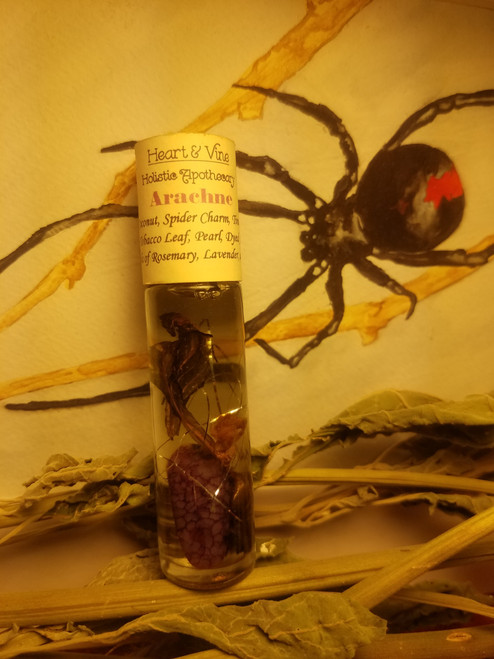 This is the oil we call "Banksy in a Bottle". In Greek mythology ARACHNE was a talented weaver who boasted that her talent was greater even than that of Athena, the goddess of weaving. Taking a bit of offense to the claim, Athena challenged Arachne to a "weave off", during which they wove the two most beautiful tapestries ever to exist. Athena's was a tapestry lauding the acts of the gods, painting them in a very heroic light. Arachne's on the other hand, showed the truth about the gods, their pettiness and greed, the many times they destroyed the lives of people selfishly, the countless atrocities the inflicted upon the innocent. Enraged by Arachne's audacity, Athena punished her by turning her into a spider, forever to be feared and reviled.

I created this oil to help evoke in you the audacity to use your voice and your creativity to DISMANTLE THE PATRIARCHY! It also helps to ease creative blocks and to use your art to more effectively tell the truth.